What is really the difference between a moose and a bear? Dad´s skills in outdoor pursuits are put to the test when the family travel to Sweden for the weekend. They will visit Annika, Dad´s cousin , whose birthday coincides with this year´s midsummer celebration. Annika has a nature park , and Dad is looking forward to showing the children where he played as a boy.

Uncle Anders seizes the opportunity to put on his old scout shirt and take out his compass.

Lille Per ,Mie , Ole and Søs thrive with Annika , but they soon find out that not every thing is ideal. A gang led by a villan called Rikart , are messing up the nature park with old refrigerators and hazardous waste. Annika is afraid to give the police evidence as Rikart has threatened to harm her elderly father,Gubben.

The father of four obtains evidence , but Rikart and his gang now pursue the family, so they must flee and take refuge in the nature parks dangerous and wild area. They must spend the night at the rock where Dad once hid as a boy from a bear, an experience Dad has never forgotten. The bear comes again and eats the family´s food, but then Dad finds his inner wild self.

With renewed strength Lille Per and his family fight against Rikart. A raft is built to overcome the wild river and the elderly man, Gubben, helps to lure the gang into a trap, but will this help the father of four get evidence to the police? 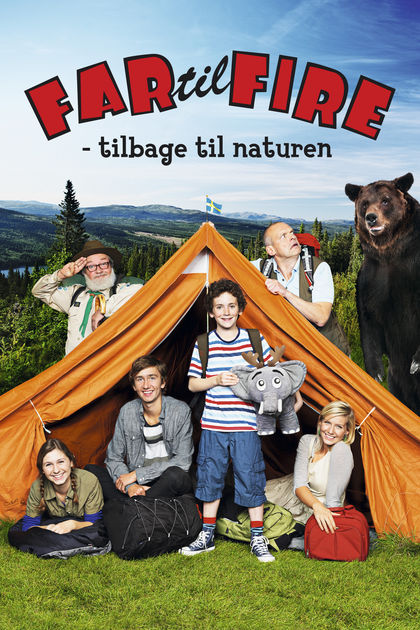 Jess Ingerslev – Uncle Anders
– is probably best known as the partner of Tom McEwan with whom he has indeed made numerous shows such as “Klyderne” and “Omsen & Momsen”.
Jess has an impressive repertoire of plays, revues as well as TV and feature films – including “Walter & Carlo – op på fars hat” (1985) and “Walter & Carlo – Yes, det er far” (1986) and “Prince of Jutland” (1994).

Kasper Kesje – Little Per – born 1999
It was Kasper’s sister’s classmate’s mother, who saw the casting ad. Kasper has already been on TV in the news program Søndagsmagasinet, which was about child actors. His absolutely greatest interest is animals of all kinds and he wants to be a paleontologist.

Kathrine Bremerskov Kaysen – Mie – born 1993
It was Kathrine’s little sister who was auditioning for the role, but since she was too young, Kathrine got the chance. She has already performed for an audience. She played Cobweb the fairy in Folketeatret’s production of  ‘A Midsummer Night’s Dream’. Kathrine works in dubbing and she has spoken and sung for computer games, animated films and live action films such as ‘Alfons Åberg’ , ‘Stella Luna’ and ‘Krageøen’. Kathrine takes singing and dancing lessons and she plays the piano.

Jakob Wilhjelm Poulsen – Ole – born 1993
Jakob was discovered through the Danmarks Radio archives, because he had written about himself in a school project for the children’s TV show ‘Amigo’. Jakob plays in three bands – a percussion band, a brass band and Søllerød Music School’s “The Great Band”, which has more than 70 musicians. He has mastered the drums as well as other types of percussion. In his free time, his greatest interests are soccer, roleplaying games and friends.

Carla Mickelborg – Søs – born 1988
It was Carla’s neighbor, who told her about the casting for the film. Carla has played amateur theatre as part of and after school program in a play H.C. Andersen. Carla used to take dancing lessons, but now she runs and rows.

Søren Bregendal – Peter – born 1983
As a member of one of Denmark’s most popular pop bands C21, Søren Bregendal has achieved national as well as international success the lead singer and songwriter of the band. He has written such songs as “She Cries”, “Tell Me Why It Ain’t Easy” and “All That I Want”; songs that made it possible for C21 to tour in 11 countries and earn gold records in 4 countries.