Being foreign, does not necessarily have to be a person from a far-away country..’

This obvious but nonetheless important truth, is what Karl and his mother will learn as they move from the strong Christian community ‘Hvide Sande’ at the westcoast in Jutland, the ethnically and religiously mixed area of Nørrebro in Copenhagen.

Sawsan, a young Turkish girl in Karl’s school class, takes him under her protective wings, and try to integrate him in the big city, with all its slang langauge, hip-hop music and so on. Sawsan is much more straight forward than you usually see among girls of her age and background – and not least in relation to a Danish boy from the darkest part of Jutland!

However, until one day her dream becomes reality, and she gets one of her songs elected to participate in this year’s children music competition” MGP”. Her father says of course NO – but then it is suddenly Karl who enters into character and suggests that they simply flee to Jutland and let her participate in the show – parents or not.

As said as done. With the help of a cousin of Karl – a very talkative fish-delivery car driver – and under close pursuit, the trip goes to Jutland.

Back in Copenhagen the mother of Karl and his very Christian grandfather – who happen to be visiting – now suddenly must learn to cooperate with Sawsans Muslim parents to find their runaway children and yet another instructive journey begins.

The whole story is supported by the music – and who thinks of differences, once the end is good!.. 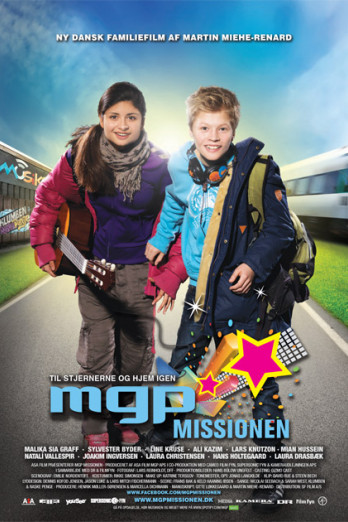 See Malika and listen to her song at a rehersal (39MB).