Background
A few years ago, Henrik Moller-Sorensen took part in a seminar at The Danish Film School in Ebeltoft. At this seminar he met the head of the Danish Children’s Libraries.. They started talking about “The Famished Child” by Cecil Bodker. The librarian told him that many children love the book, and she thought that a screen version of the book would be a fantastic idea. Her enthusiasm made him rush home and read the book immediately. He was fascinated by the story and contacted the consultant for children’s films at the Danish Film Institute, Thomas Danielsson. He too was fascinated by the story and the two of them contacted film director Morten Kohlert, whose graduation film “The Masquerade” from The Danish Film School is an exciting and highly acclaimed film for young people. Morten Kohlert was immediately interested in the project and began writing the manuscript. Cecil Bodker has also read the manuscript and is pleased with the result. 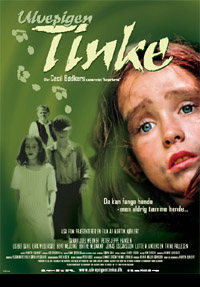 The story
The story takes place in 1850. It’s about a nine-year-old girl called Tinke who is a dirty and hungry little girl. Both of her parents are dead, and she has miraculously survived in the wilds. She meets a shepherd lad, Larus, who gives her milk and bread. Little by little he gains her trust, and he realizes that she would starve if he didn’t help her. Larus takes Tinke back to the farm where he works. The farmer wants to send her to the poorhouse, however, his wife wants to keep Tinke and raise her as the daughter she never had. But Tinke is like a wild animal and hasn’t good manners – and she has other plans, a plan she’s had since her mother’s death.

When the mother is on her deathbed, she gives Tinke a valuable necklace and tells her that she is from a very rich family, yet she eloped with Tinke’s father and hasn’t seen her parents since. She tells Tinke that she should use the necklace to find her grandparents …

When the farmer finds out that Tinke is from a rich family, he decides to find her grandparents in order to get them to pay for her.

The grandparents are found and they take Tinke home, but she has trouble convincing them that she is their grandchild. She lost the necklace by accident …

The author
Cecil Bodker was born in 1927 and has had a fantastic career. She is known for her collections of poetry and for her praised children’s books including the “Silas” books which were successfully adapted to the screen in Germany. Cecil Bodker honored in 1998 when she received The Royal Danish Academy’s author’s prize.

The director and scriptwriter
Morten Kohlert was born in 1961 and graduated from the Danish School of Journalism in 1989. He then studied to be a director at the Danish Film School and graduated in 1995. In 1996 he received the Danish film award, a Bodil, for his graduation film “The Masquerade”.

Prices
In 2002 The Danish filmphotographer Bo Tengberg received the price for New Cinematografi at the Festival for Filmphotographers in Madrid Imagen. The price was given Bo Tengberg because of his artistic work on “Ulvepigen Tinke”.

Bronze-price on the 14th Cairo International Film Festival for Children, 2004