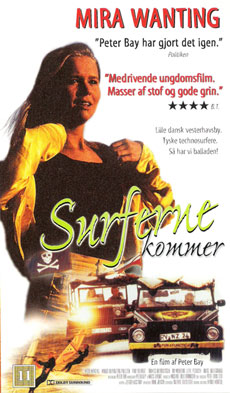 The Surfers are Coming tells the comic and action-filled story of 16-year-old Anne (Mira Wanting) and her encounter with love and the problems in standing out from the crowd in the small fishing village. Anne is not quite the other young people in the village because she has the courage to do and say what she thinks. Anne’s accent gives away that fact that she has moved from Copenhagen to this small fishing community.

Nonetheless Anne is accepted by the other young people because her boyfriend “Crown Prince” Nils-Peter, who hopes to take over his father’s two trawlers, is highly respected in this small community.

Anne is provoked by the conformity and intolerance in the village, and along with her friend, Anne is the only one who doesn’t automatically react hatefully and aggressively towards some German surfers. When Anne takes surfing lessons from the charming Dieter, the conflict comes to a head. Anne is given the cold shoulder by Nils-Peter and the other young people in town, and she feels torn between her attraction to Dieter and her loyalty to the town.

After a fight between the village youths and the newly arrived surfers at the local disco, there is a chance for reconciliation between the two parties. Nils-Peter and the other young people provoke Dieter to surf into a violent storm. Dieter disappears in the waves, and despite their differences Nils-Peter and Anne’s brother try to save Dieter. From the beach Anne can see Nils-Peter and her brother disappear into the waves and a rescue cutter sails out to retrieve the bodies of three lifeless boys. Who drowns and who survives is revealed in the end where the village and surfers are reconciled, and the surfers leave. But things have changed for Anne …

The Surfers are Coming is directed by Peter Bay.