Erik Clausen’s film manuscript ‘Carl, My Childhood Symphony’, which is about the Danish composer Carl Nielsen (1865-1931) in his early years, is based on the composer’s autobiography.

‘Our childhood is of the utmost importance. One thing is certain. When I compose, I often imagine landscapes and people from my childhood. The intellectual side of my music is like a layer, while the atmospheres come from my childhood.’ – Carl Nielsen

At the age of seven Carl was already an extraordinary child. He was one of 12 children, and being from a poor family, he was forced to work at an early age in order to earn money for the family.

As well as the extra income being important, music was an extremely important part of their daily lives. Along with his father, Niels Maler, and one of his brothers, he played at weddings and other festive occasions in town. This contributed to young Carl’s natural talent for composition and expressing himself musically. 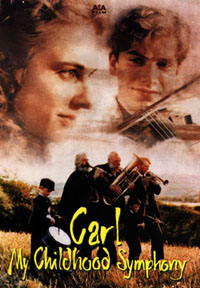 His ambitious mother, Maren Kristine, saw his special talent and managed to get him an audition for the regimental band in which his talent was further developed by the strict discipline. During this time he began to compose his own music, being inspired by the people he met during that time.

The turning point came when he met Oustzen who worked as a piano player at the local bar. Oustzen was immediately aware of Carl’s potential and forced him not only to feel the music but also to stick to his unique way of composing. Soon Carl began to earn extra money by playing at important receptions and parties for the upper class. This is where he falls in love with Anna who won’t have anything to do with him because of their different social backgrounds. She goes back to Sweden, which devastates him. Because of Anna’s reaction, he realizes that he has to work even harder to be accepted – not only as a musician, but as a person. He leaves the military in order to be admitted to the Royal Danish Academy of Music and thus begins his international career.

‘Carl, My Childhood Symphony’ is a poetic story that follows Carl Nielsen’s development from the age of 7 to 18 when he is admitted to the Danish Academy of Music. It’s the story of a boy whose life is steadily influenced by music.