When it’s been raining, a tear lies in the wrinkle under my eye behind my glasses. I have
also once had a smooth face and wasn’t taller than one of my legs are today, and up until the summer of 1935 I was the most decent person in the world. What a joy that lies exist – imagine if everything you heard was true.’

The adult Gustav Adolf (in the voice of Jesper Klein) tells the bittersweet story about the significant day when he, as a child, went to the beach to enjoy the pleasures of bathing with his parents and the other tenants in the building.

The story takes place in the 1930’s in Copenhagen where we meet a working-class family consisting of Axel (played by Erik Clausen), Svea (played by Nina Gunke), his wonderful and lovable Swedish wife who good-humoredly bears with her husband’s often rather dramatic gift of the gab, and their dreamer of a son, Gustav Adolf. 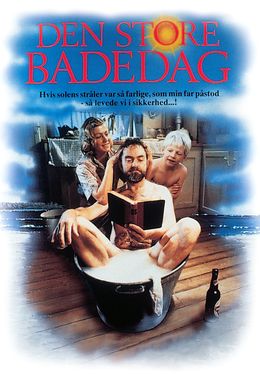 Young Gustav Adolf, age 7, (played by 10-year-old Benjamin Rothenborg Vide) has great respect for his father and his enormous knowledge of all sorts of strange things. His adventurous stories of the vast Argentine pampas and the seven seas give them impression of him being a very knowledgeable and widely traveled man.

Gustav Adolf loves to be at home with his family.

But he is also titillated by his 14-year-old babysitter Alma, (played by Karina Rasmussen) who often asks Gustav Adolf to stand guard at the cellar door when she for a trifle takes loving care of the happy plumber’s assistant.

Svea dreams of going to the beach to swim. And although Axel at first considers this some new-fangled dangerous nonsense because the sun burns your skin and the water is ice-cold, he changes his mind and enthusiastically declares the all the tenants in the building should go to the beach together, as he says, out to ‘the bracing ocean and the healthy sunshine – we’re going out to mighty nature, Svea.’

And off they go: The publican Emilie (played by Liselotte Lohmann), her husband ‘The Shadow’ (played by Bjarne Liller), Mrs. Frederiksen (played by Kirsten Rolffes) who has kleptomaniac tendencies, the Jewish Margolinskis comprising a father (Peter Huttner) and his young intellectual son (Adam Bindslev) and Svea’s sister and brother-in-law (played by Yvonne Schalonske and Finn Nielsen). The party is led by Axel and Svea with young Gustav Adolf bringing up the rear.

The day at the beach is long and full of intense experiences for Gustav Adolf, and when it’s finally over, he has not only a new outlook on life, but also a different relationship with his father.

Prices:
The Great Day On The Beach won following prices:
Best Film Director (directed by Stellan Ollsson) and
Best Actress at the Paris Film Festival,
the Grand Prix du Jury, in Rouen and
the OCIC’s Prize, in San Sebastian.